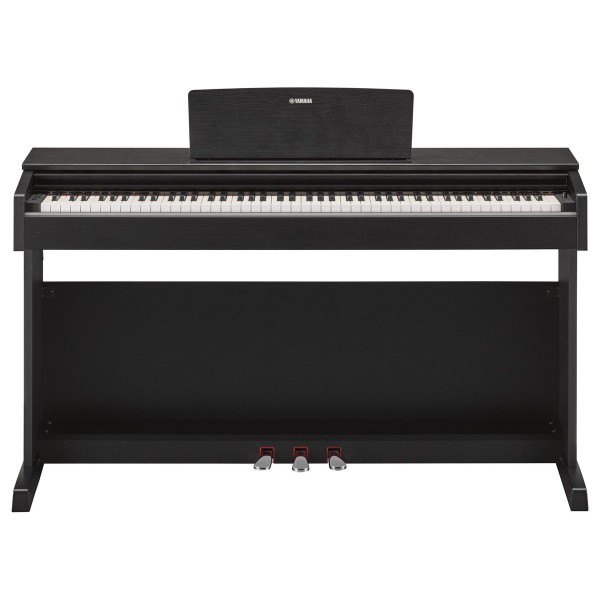 The Yamaha Arius YDP 163 is an excellent choice for the developing student or more experienced player. This digital piano features an upgraded hammer keyboard with synthetic ivory tops for an authentic piano feel. With an improved pure CF sound engine and an increased polyphony, the YDP 163 opens up more possibilities for expression. A Stereophonic Optimiser guarantees you the very best sound even when playing with headphones whilst the newly improved reverb brings depth to your playing. This piano is also now compatible with a host of apps including the Digital Piano Controller for easy and intuitive control.

Yamaha’s sound is the result of years of piano making expertise in producing exceptionally accurate and natural piano tones. The rich and authentic sound is reproduced from Yamaha CFIIIS 9' concert grand piano. This sound is captured perfectly; so you hear every nuance of the sound with exceptional clarity.

The speaker system is improved compared to the YDP 143. With two 20w speakers when playing you can really hear greater nuances expressed by the piano from your fingertips. The bigger the speakers bring greater sound quality with a richer bass sound and more clarity in the top end.

A great feature of digital pianos is the ability to practice quietly or in silence. The sound technology built within allows this without the loss of sound quality. The sound you hear through the headphones has been upgraded from the previous YDP 162 model and is now more spacious with a surrounding ambiance, providing a more realistic and natural listening experience.

The Yamaha YDP 163 features 88 fully-weighted keys, reproducing the touch of an acoustic piano for natural playability. With heavier pressure in the lower register that gets lighter towards higher notes. It also features a three-sensor configuration, which accurately senses and interprets the behavior of the keyboard in order to provide a grand piano-style response and feel. This allows for quick note repetition and authentic expressive control.

The keys are made with synthetic ivory keytops providing a tactile surface to the white keys, absorbing moisture from the fingers and preventing them from slipping. Compared to the YDP 163 that has matte keys you the synthetic ivory will bring greater authenticity.

Record your performances on the Yamaha YDP 163

The YDP 163 has a built-in recording function that captures your performance with a touch of a button. Record up to 2 tracks for simultaneous playback. Giving you the ability to record both hands separately, or overlay parts with different voices. These tracks can be downloaded to your computer using a USB cable.

The YDP 163 comes complete with a grand feel 3 pedal system similar to an acoustic piano. The result is more realistic sound.

Connect with the Yamaha YDP 163

Yamaha’s digital controller app is a free piano app that allows you to controls many functions included in the piano. With your iPhone or iPad, you can now control the piano from your device. Allowing access to adjust settings, select voices and even record your performances. The YDP 163 has USB connectivity making it easier to connect the piano to your computer or phone.

The YDP 163 has a traditional piano design housed in an elegant, wooden cabinet. The cabinet has a raised top and features a sliding keyboard cover and raised music stand. The smaller speakers allow for a shorter height cabinet at 815 mm tall suitable for smaller modern homes. The colour variations available are black, rosewood and white in a satin finish.