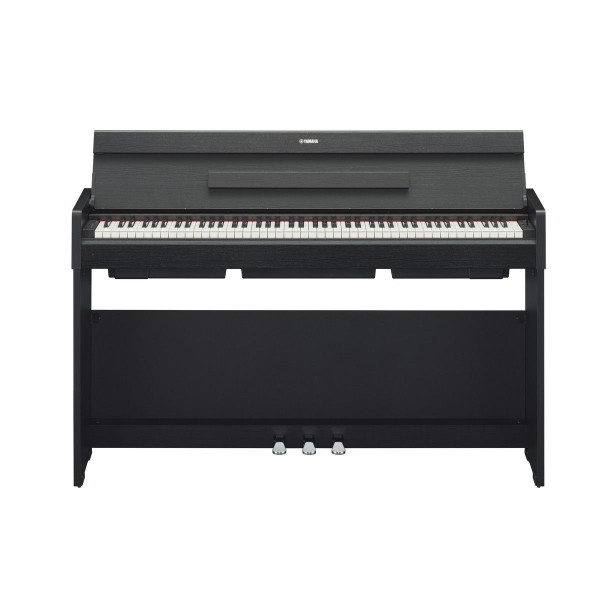 Similarly, the YDP S34 shares the same the tone with one of Yamaha flagship 9’ CFX concert grand piano. This sound offers sparkling highs and a powerful resonant bass sound that projects to the furthest reaches of any concert hall. Speaker System - A newly designed speaker system can deliver a very powerful sound from low to high notes. When using the headphones you'll really enjoy the sound experience you get from the stereophonic optimiser. This newly added technology makes the YDP S34 sound like your playing in the room instead of through the headphones. The space of the sound is just like if you were playing in your bedroom through the output speakers. Yamaha has implemented acoustic optimisers, creating a smoother and natural sound across. To co-align, Yamaha has also added their Intelligent Acoustic Control (IAC) that automatically adjusts the EQ allowing players to enjoy the balanced piano tones at any volume level. Characteristics sound of an acoustic grand piano - The YDP S34 can also recreate the characteristics of an acoustic grand piano sound in a more realistic fashion. The Key-off Samples feature reproduces the slight change in sound at the instant you remove your fingers from the keys. And String resonance when a hammer of a grand piano strikes its string, the other strings will also resonate. The YDP S34 can reproduce this effect using its String Resonance feature.

The Yamaha YDP S34 shares the same playing feel as an acoustic piano. With 88 weighted keys, these are also graded hammer keys meaning the keys in the bottom register of the piano require a little more pressure to play than those in the top octaves. The matte finish on the black keys delivers an exquisite playing experience that you would expect to find on a much more higher priced model but also prevent your fingers from slipping. Like all digital pianos, the YDP S34 requires no tuning, as a result, the instrument is always in full playing operation. The keyboard can be split in two to allow teacher and student to sit side by side or to play different music style with bass in the left hand and 2 layered tones in the right.

With modern homes becoming increasingly compact, the Arius YDP S34 offers a creative and contemporary approach to the digital piano. Its stylish and discrete design brings elegance to any room while continuing to deliver amazing sound quality. With a soft falling lid and available in three colours - satin black, satin white and satin white ash effect. You can count on the Arius YDP S34 to be a high-quality instrument that doubles as a stylish piece of furniture with sound quality.

Record Your Performance With The Yamaha YDP S34

The two-track recording feature allows you the player to either record a complete performance. You can then overdub a second track or you can use a different voice for this if you wish. Or, you can use this useful feature when learning a piece of music to record one hand first, and then practice your other hand whilst playback of the part you have already recorded. USB Connectivity - Connect the YDP-S34 to your computer or smart device using the USB to host connection. All you need is a standard USB cable (plus an Apple Camera Kit if using an iPad). Finally, this allows you to widen the possibilities for musical creation via a third-party software application, or through use of the Yamaha Smart Pianist app.